Click here for a PDF of the Hot Topic

The use of drugs (including illegal, prescription, and over-the-counter) can make driving a motor vehicle unsafe. The effects of specific drugs differ depending on how they act in the brain. Drug impaired driving is a complex problem due to the large number of substances with the potential to impair driving and increase crash risk, the variations in the ways different drugs can impair driving, the lack of basic information about many potentially impairing drugs, and the differences in the ways that drugs can affect the body and behavior. The behavioral effects of drugs are not as well understood as the behavioral effects of alcohol. Certain generalizations can be made: high doses generally have a larger effect than small doses; well-learned tasks are less affected than novel tasks; and certain variables, such as prior exposure to a drug, can either reduce or accentuate expected effects, depending on circumstances. The ability to predict an individual’s performance at a specific dosage of drugs other than alcohol is limited.1

Note: Drug presence does not necessarily imply impairment. For many drug types, drug presence can be detected long after any impairment that might affect driving has passed. Also, whereas the impairment effects for various concentration levels of alcohol is well understood, little evidence is available to link concentrations of other drug types to driver performance. An important distinction to make when evaluating drugged driving data is the mere presence of a drug in a person’s system, as compared to the person being impaired by a drug in his/her system. Drug test data provides information about drug presence, rather than whether the driver was impaired by a drug at the time of a crash. Data identifying a driver as “drug positive” indicates only that a drug was in his/her system at the time of the crash. It does not indicate that a person was impaired by the drug. Thus, knowing that a driver tested positive for drugs does not necessarily indicate that the person was impaired by the drug at the time of the crash.1-2 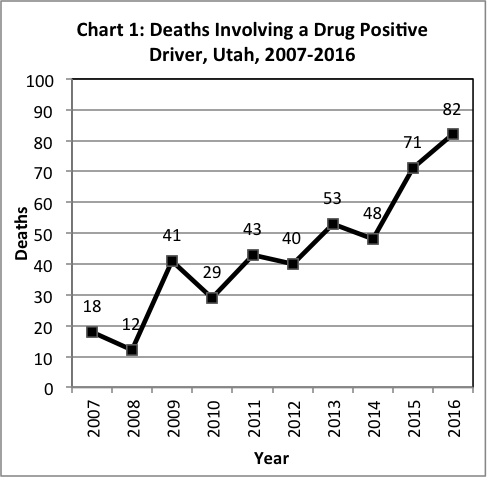 Some of the increase in positive drug tests may be due to an increase in the number of drivers in fatal crashes that are tested for drugs with the results being reported to the Fatality Analysis Reporting System (FARS). The percent of drivers over the last five years (2012-2016) that were tested has seen a slight increase from 50.8% in 2012 to 56.0% in 2016. See Chart 2 for a display by year. 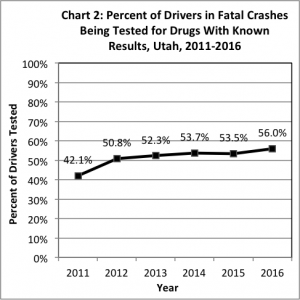 Which drugs are drivers testing positive for? 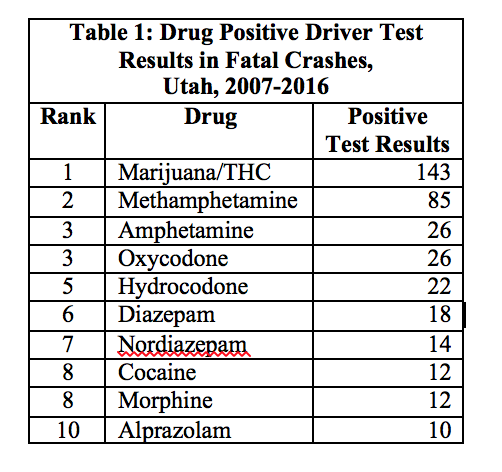 Marijuana is the most commonly used illegal drug in the United States. Research studies have shown negative effects of marijuana on drivers, including an impairment of judgment of time and distance, decrease in motor coordination, increase in lane weaving, poor reaction time, and decrease in attention to the road.3-6 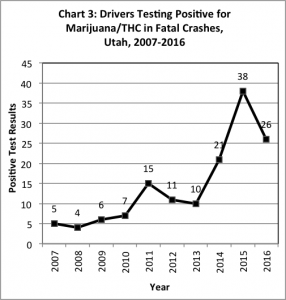 Methamphetamine is an extremely addictive stimulant drug. It can be prescribed by a doctor to treat attention deficit hyperactivity disorder (ADHD) and other conditions, although it is rarely used medically, and only at doses much lower than those typically abused. 7 Methamphetamine can lead drivers to be aggressive and reckless when driving.8 Methamphetamine is the second highest drug that drivers are testing positive for in fatal crashes. There have been 85 positive test results for methamphetamine over the last 10 years. Most (73%) of these positive test results have been over the last 5 years. See Chart 4 for a display by year. 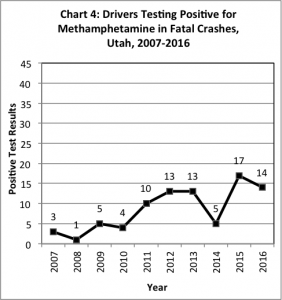 Some prescription drugs have mind-altering properties and, because of that, are sometimes taken for reasons or in ways or amounts not intended by a doctor, or taken by someone other than the person for whom they are prescribed. Commonly abused classes of prescription drugs include opioids (for pain), central nervous system depressants (for anxiety and sleep disorders), and stimulants (for ADHD and narcolepsy). It is hard to distinguish between legal and illicit use of prescription drugs.9

After the top two drugs, the majority of the rest of the ten highest drugs are prescription drugs. Keep in mind that the total positive driver test results for the third through tenth highest drugs are about the same as the total for just marijuana.

Oxycodone (#3), Hydrocodone (#5), and Morphine (#8) are opioid prescription drugs that are commonly abused. These drugs affect driving as they may impair thinking or reactions, and they may cause dizziness or severe drowsiness.10 Amphetamine (#3) is a stimulant prescription drug. Amphetamine affects driving as it may cause dizziness, blurred vision, or restlessness, and it may hide the symptoms of extreme tiredness.10 Diazepam (#6), Nordiazepam (#7), and Alprazolam (#10) are central nervous system depressant prescription drugs. These drugs affect driving by impairing thinking, reactions, and alertness.11

Who are the Drug Positive Drivers?

In an effort to get a truer picture of the amount of drug positive drivers who were under the influence, the crash report fields “suspected drug/alcohol involvement” and “suspected driving under the influence of alcohol/drugs/medication” were analyzed. While this is not a perfect method of analyzing impairment and it has its own drawbacks, it provides another tool in analyzing the data. Over the last five years, 35.5% of the drivers testing positive for drugs in fatal crashes were suspected of having drug/alcohol involvement in the crash or suspected driving under the influence. Many of the drivers who were not suspected of having drug/alcohol involvement in the crash were marked as unknown involvement (45.0%). This may be due to the fact that many of the drug positive drivers in fatal crashes die in the crash so field sobriety testing and evaluations by a drug recognition expert officer, the two most substantive roadside impairment testing methods, could not be employed.1,8

ON THE BACK BURNER

Previous Hot Topics are available below in PDF

April 2012: Where are the Worst Drivers in Utah?